If your just looking to rename files instead of fix encodings check this article out: fixing bad filenames or fixing movie names

WINDOWS and LINUX: Looking at Shares and the have folder/files without names

If your accessing a share and see files/folders without names, this means you probably have an encoding issue.

Here is the setup:

2) Linux server (that has SAMBA file sharing) which has shares Music and Backup (hostname: lin1)

You are using your Windows PC (win1) and you log in to the Linux Server (Lin1) Music share and see this: 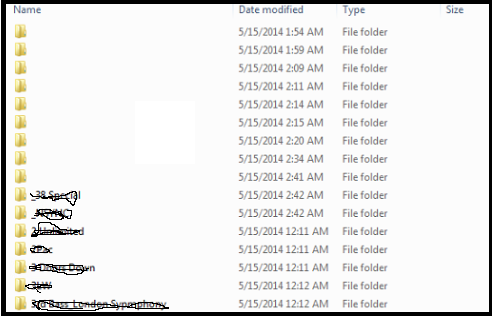 NOTE: i had to scrach out the folder name to keep information private. Imagine this is the Music share (which has alot of songs and artists from many different countries … hint hint)

What causes the above? Windows and linux have different encodings that they prefer. UTF16 is what windows uses for filenames, where as linux uses UTF8. So sometimes that conversion doesnt happen to well. Most likely cause of this (actually in this case it is the cause of this). There was a copy procedure from another Windows server (say the hostname is win2) to this Linux server. There is a bug with samba where the copy doesnt happen to do the filename conversions correct for different international characters. For example the “é ” can turn into an “e”, but instead it turns into an upside down question “?” with a  hotdog ontop or looks like this “./Expos¦” (it can look many different ways depending on your encodings on your terminal, your browser, etc) .

Solution 1 – best one? Login to the Linux server, and go directly to that share

Solution 2 – not the best one? Go into win2 server and change all of the internation characters like “Exposé ” to simply just “Expose”. So that the bad conversion doesnt happen.