If you would like to separate your broadcast domain to 2 vlans
(or more) then this article is for you. This article builds off of the foundation discussed in this Layer 2 VLANS article. You can do that with a Layer 2 switch and a router (which you should already have). I dont have a step by step UI guide, I only give you the outline of the steps. Its up to you to figure out how to use the UI (the software manual is a great starting place, or if your like me you can just tackle it head on)

If your router understands VLANS: the end result will be 2 broadcast domain. Each network will have its own subnet. Such as 10.10.0.x and 10.20.0.x for vlan 10 and 20 respectively. Traffic will be separated on Layer 2 and Layer 3. This is alike to Cisco Lessons of router on a stick. Where your switch has 2 vlans, and the router does the routing for 2 vlans. I will highlight items related to this with light blue. 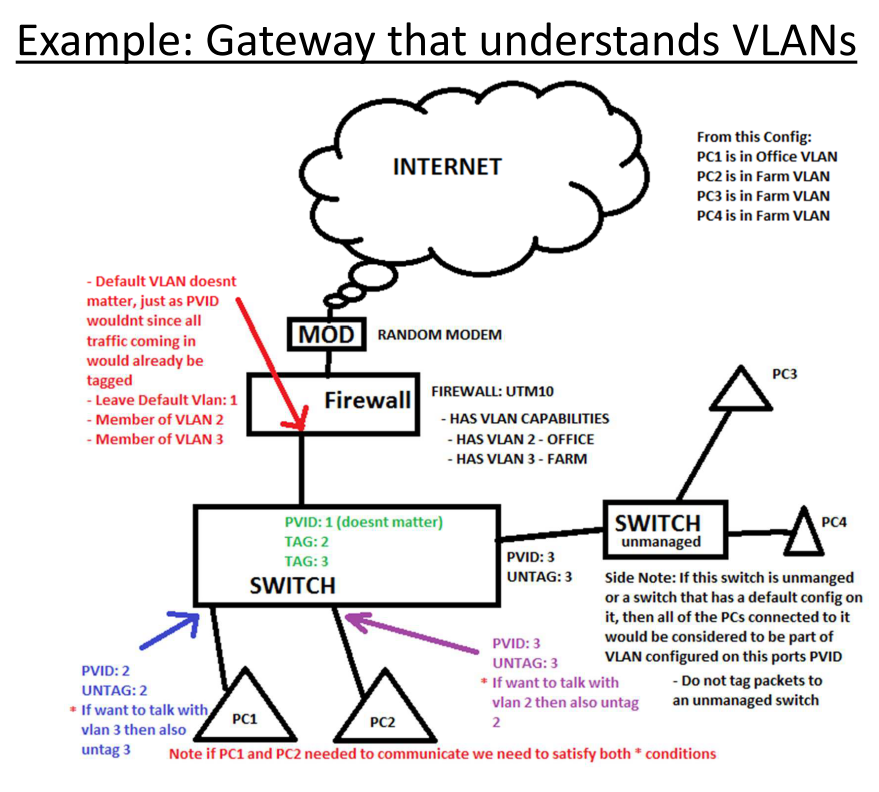 If your router does NOT understand VLANS: the end result will be 2 broadcast domains. Each network will be in the same subnet. So every PC will be in 10.10.0.x. However traffic will be seperated on Layer 2. Albeit, You can jerry-rig each VLAN to have different IPs, on the router you will just need to set 2 IPs on the same interface (this is called multihoming, or simply having a primary IP and a secondary IP, it doesnt matter which network has the secondary IP or vice versa). I will highlight items related to this with light yellow. 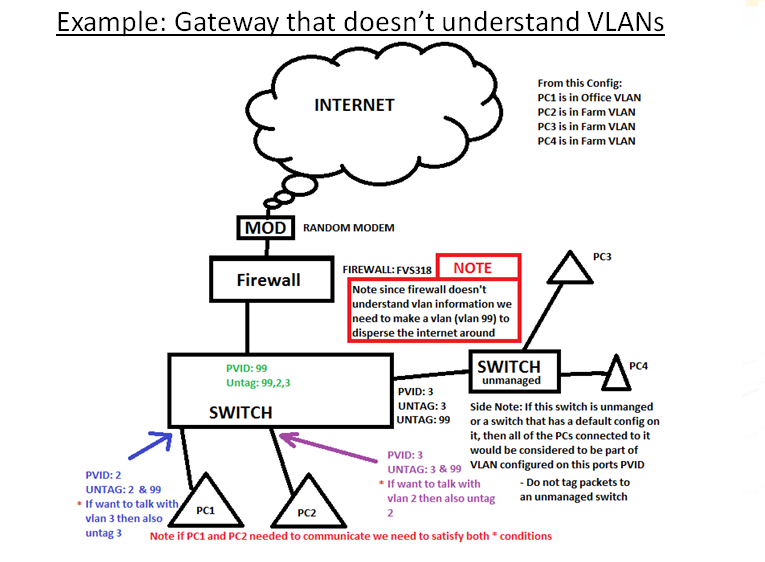 Follow along with this infographic captures the basic concepts of tagging/untagging/pvids with 802.1q vlans & how it operates to frames traveling thru these switches (more of this is explained above)

Here is an example written out step by step using VLAN 10 and 20.& 99 (for internet, if the router doesn’t understand vlans). These steps are written out in a tree fashion as you might go a different route (there is a different set of steps if router understands vlans versus if it does not). In my infographic (see above) I use VLANS 1,2,3 (this goes against my thumb rule of NOT using VLAN #1 and for that matter VLANs numbered 1 thru 10 – as those can be used by vendors for vendor specific mappings)

Im assuming the switch here is strictly a Layer 2 switch. Meaning you cant set IPs on its VLANs so your cant have VLAN routing on it. If you have a Layer 3 switch which does support IPs on its VLANS, you can take away that functionality by not enabling “ip routing”.

NOTE: without having that extra VLAN 99, internet communication will not be possible with a router that does not understand vlans. This is because traffic on the way back in will either have to be put on vlan 10 or 20, so that means half of your return traffic will not go the right way. Vlan 99 allows for return traffic to be distributed to all ports.

NOTE:  Netgear and HP handle vlans identically using their tag,untag,blank, and pvid notations. Cisco doesnt use those words but nonetheless the end result is the same. (For example a trunk port with Cisco is identical to a HP or NETGEAR switch tagging every vlan on a port. Pvid on trunk ports Doesnt matter as you will learn from the article). This article explains it all. And you will understand how to generally set this up. The only thing not covered is step by step UI instructions but as a tech that should be easy once you understand your objective and how to achieve it. First read past all of the updates then reread the article to make sure you understood.